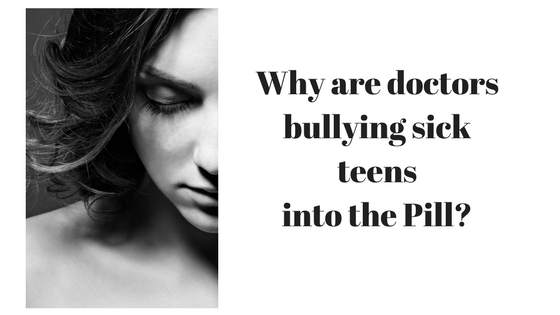 Too often I hear my patients say how they did not want to take any form of contraception for their problems but felt forced into it. Too many girls are having this experience. What makes it worse is that when some of these girls go on the Pill it makes them feel so much worse.
These girls instinctively know what’s right and wrong for their bodies.
Doctors need to respect these girls and not bully them into something they clearly do not want.

This is what I have heard from a variety of my patients last year:

” I felt like she wouldn’t let me out of the room unless I took it.”

“She said it would be my fault if I got pregnant ( when I wasn’t even sexually active).”

“I felt bullied into it.”

“They make you feel like you have no choice.”

“I really didn’t want it, now everything is much worse.”Various patients in 2016

This is Tracy’s story. Tracy is a young HPV vaccine injured girl.

“I had been recommended to a program to address my problems with intestinal motility.
The gynaecological doctor I had seen many times as a teen so I thought, why not? I had been off any pill and had one IUD previously. The IUD was placed because of passing out and anemia. It had to be removed because after it was placed I had an unexplained nerve pain. I had tried every single pill or patch other than the implant and my body rejected them all. I was certain I was in a good place with my menstruation cycle and my cramps and flow were less of a problem than ever.

After being injured by the HPV vaccine, I worry that I might not even be able to get pregnant at all.

She said that she felt uncomfortable letting me leave the appointment without a form of birth control. She mentioned that I was in no condition to be having a baby “

Going against every intuitive fiber in my body and feeling guilty and anxious, I caved and agreed to let her put in a copper IUD.Tracy

“Within 30 minutes the nerve pain had returned. I was devastated. The pain would have me on the ground , in tears and would be triggered just by a cramp. I have had chronic pain since my first shot at 11, so I am no rookie to pain. But this was absolutely debilitating.
As if the first appointment wasn’t horrible enough, the partner and the head nurse decided that it was okay to talk down to me, talk me out of my decision, and put me on another birth control before they would take it out.”

I am laying there with my eyes shut, holding my mother’s hand, waiting for it to be over when I hear “LOOK AT IT!” “LOOK AT IT!”
I open my eyes to her dangling my IUD over me with a nasty look on her face. I look up and say “Thank God.” and slammed my head back down on the pillow.Tracy

“Since she had been completely dismissing everything I was telling her, being condescending and had a rude tone the entire time, I figured she clearly didn’t care about my experience with her or her facility, so I didn’t care about her feelings when I filled my end of appointment review.”

“I was a little shocked and scared when the doctor mentioned the pill. I already struggled with my health and from what I’d heard from friends, it doesn’t always agree with you even if you’re in perfect health.
I visited the gynecologist about irregular periods, intense cramps, and an odd pain in my lower abdomen. Immediately, she mentioned birth control, without an exam or any testing.
She said that if I didn’t use the pill to prevent cysts, I might have infertility problems later.”

“I immediately said no. “Charlene

“She said that on the pill, everything would get better.
My mom shared that she would rather try natural methods and that she’d heard that girls with Gardasil injury do very poorly on the pill.
The doctor said that there were no published studies supporting this.”

“After much consideration, I caved and agreed to try the pill. “Charlene

I only lasted a week on it. Every symptom I had flared, I slept for 16 hours a day, and symptoms I hadn’t seen in years resurfaced worse than ever.”

Both the girls say they “caved” in to having treatment.

These are not isolated stories. No girl should be forced to have treatment they have adamantly expressed they do not want.
Unfortunately the hospitals have very little else to offer for gynaecological problems. It is not a “cure all” gynaecological drug.
Girls, no matter what their age need to be treated with respect.
Until the hospitals acknowledge that the HPV vaccine causes such internal chaos in so many girls and also make the link that the Pill causes more problems in these fragile patients, the majority of doctors will continue to prescribe this, and more shame it is done with such arrogance by so many.